When our North American representative, Malcolm Wechsler, reported after his first visit to the Episcopal church of St Peter, St Louis, he said this might be the job which would test our resolve to use only mechanical action for new instruments. He might just have been right.

St Peter's had an ageing electro-pneumatic instrument divided on two sides of the Chancel, with a detached console. This was an arrangement which suited the organist and choir, as well as the liturgy of the church. There was no other place for the organ in this modestly sized classical New England style church, as the rear gallery afforded rather less than three metres in height. So a chancel organ was the only option. However, once we had asked a few questions, it appeared that there might be a way to use mechanical action after all. 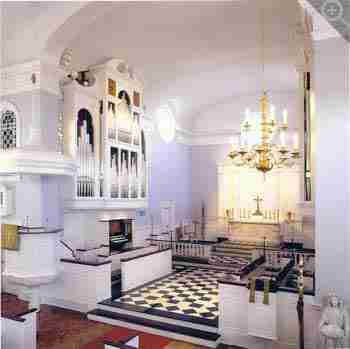 On subsequent visits, Malcolm together with Geoff McMahon (the head designer) investigated more closely, and a way was found by which it appeared possible to run the trackers for the manuals up the front of the case and those for the pedals under the floor in the ceiling of the undercroft. Not long after that, the writer went to St Louis to assemble and finish the four-stop Chest Organ that the church had ordered, and some time was also spent taking more accurate measurements of the dimensions of the building and investigating under the floor of the chancel. Some hidden heating and air conditioning ducts looked as if they might present us with sufficient problems to make mechanical action too contrived but a way was found around the problem, one of which was to put the top two notes of the pedal trackers running beneath the floor next to the lowest ones, something which might cause some confusion to future organ builders.

A two-manual and pedal scheme was presented and initially found favour. The chambers were of an ideal size for a two-manual scheme, and there was ample space for the pedal section on the opposite side, the question about the action having been resolved. But the organist had been used to a three-manual organ, and it appeared that funds might be available for a larger instrument. This is a problem that we frequently encounter. A church has an inadequate instrument of a certain size and, perhaps understandably, cannot believe that a smaller but well designed and finished organ can actually be more versatile than the instrument they are used to. But a three-manual organ it had to be, and initial exploratory drawings seemed to indicate it would be possible. Two 32ft stops also appeared on the Pedal (being extensions of the related 16ft stops).

Building organs in chambers makes particular demands of an organ builder and also has disadvantages which, with the best will in the world, cannot be overcome. The directness and clarity an organ can display by speaking down the length of the church is severely impaired in an organ speaking across the chancel from a chamber. But some things can be done to mitigate the losses.

Firstly, all carpet must be banned from the chancel area as well as from the body of the church. Here, we also persuaded the church to make large openings in the walls of the chamber facing down the church which were covered with very open carving without a cloth backing. This helped a great deal. In addition, keeping the brightness of the pipework up can help to reduce the loss of the upper frequencies which have to reach the body of the church by reflection, rather than directly.

Whilst voicing the organ, there were a number of instances where we became further disenchanted with the chamber situation, and it raises the question as to whether it is a viable option and if one should allow oneself to do a similar layout again. There is no doubt that achieving the right balance is more difficult. The spatial separation that one experiences with vertically disposed departments is never going to be as marked. The Swell Organ (which has shutters both on the front and on the side close to the opening of the chamber into the body of the church) was not badly affected. The Great was more disadvantaged, sited, as it had to be, below the Swell and behind the Choir Organs, but responded well to a certain amount of re-balancing of the Principal chorus. Most surprisingly, the Choir Organ maintained its feeling of forwardness without being forced, mainly because it was placed right at the front of the organ with relatively open casework, of a design that did not require carving.

Lack of height did cause us problems. The 32ft reed had to be half length, and the 32ft octave has leathered shallots to make it more foundational. There was also not enough height for the bottom six notes of the Pedal Open Diapason 16 and the Swell Open Diapason 8. Both these stops utilised the equivalent notes of the Bourdon 16 and Gedackt 8 with "helpers" of 8 and 4ft pitch, respectively. These are pipes of relatively narrow scale, low cut-up and very gently voiced which supply exactly those harmonics which are missing from the stopped pipes. This is not a new idea, and was practised by (amongst others) Snetzler, but it does seem to be a particularly English practice. In the case of the Pedal Open, the Bourdon pipes that were used had two pallets so that when used for the Open Diapason, the note could be "voiced" a little louder by feeding the pipes with a little more wind.

Another point of interest is perhaps the Great Mounted Cornet of three, rather than the usual five, ranks. The primary objective of this is to save space but it does have anther significant advantage. To be used as a Cornet, 8 and 4ft stops have to be added, and by using various combinations of the Open Diapason, Stopped Diapason, Gamba, Principal and Open Flute, a variety of Cornet tones can be synthesised, adding both interest and versatility to the stop not available with the usual five-rank Cornet.

As always in our instruments, the winding is by traditional bellows with concussions under the soundboards. This gives a life to the winding (without becoming noticeably unsteady) in a way that is never quite achieved with any form of schwimmer. Whereas the schwimmer can be set up to give some life, it is almost always achieved with a fluctuation in pressure below the set value, rather than above and below as is the nature of the traditional bellows. Coupled with this, we use traditional Dom Bédos tremulants. The effect of these is quite unlike any other tremulant around. The tremor is not entirely even and varies in depth and speed depending on the amount of wind being drawn through it. The ear appreciates this small fluctuation and the extra work it takes (which can be significant) in getting them to work well is worth it. We may still be the only builders to use Dom Bédos tremulants that are activated electrically. Is the old master amused or turning in his grave? The key action is suspended and floating, as is logical for the layout of the organ.

When the necessary building alterations were undertaken to accommodate the organ, shortly before it was delivered, a large steel beam was discovered that could not be removed but necessitated alterations to the organ on site, as it was being installed. We would like to acknowledge the invaluable assistance offered by the St Louis organ builder, Martin Ott, in making this task so much easier, by offering us the use of his workshops and facilities to make some of the alterations. A heartening example of the way organ builders are now prepared to assist each other, for which we are grateful.

View the Specification of the organ at St Peter, St Louis (completed 2001) and pipe scales.

St. Louis also has a small chamber organ of ours. This little organ had its debut with its very similar sister at the premier UK performance of the Bach St. John Passion as realised by Ton Koopman at one of the year 2000 Promenade Concerts in the Royal Albert Hall.

All stops divided at middle C, transposable to A415 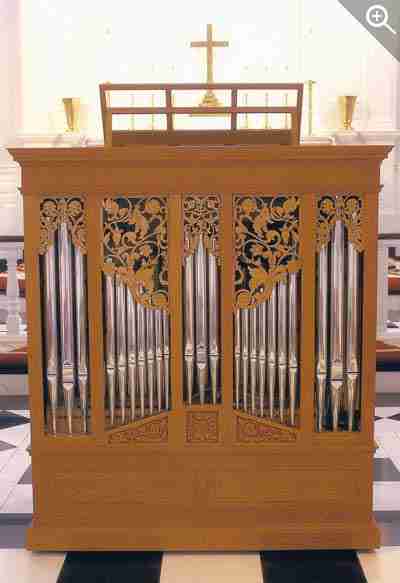